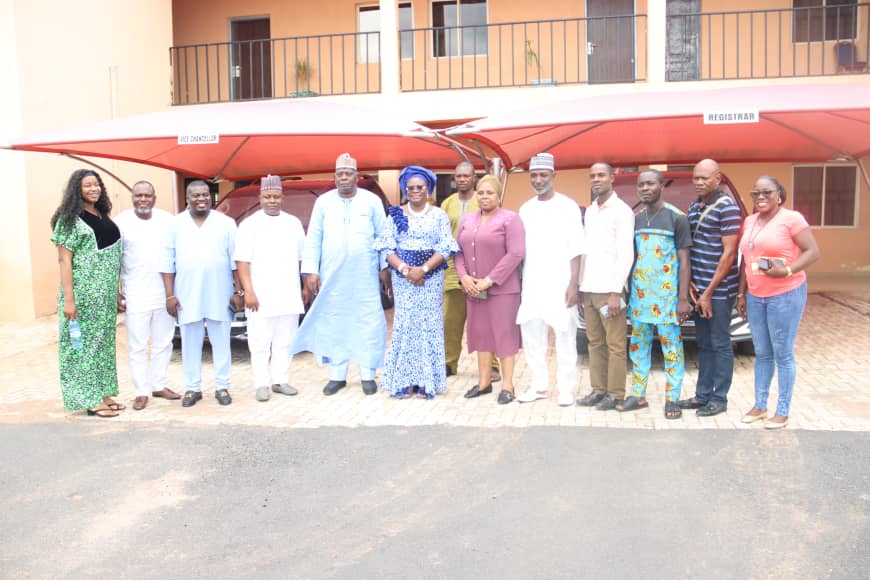 The team leader of NLA, Dr. Thomas Adubika thanked the Vice Chancellor, Engr. Prof. Salawu Sadiku for allowing CUSTECH, Osara to be part of the NLA. He said he was happy to see the presence of CUSTECH, Osara led by the University Librarian in person of Mr. Jeremiah Salifu during the association’s last annual conference that took place at Prince Abubakar Audu University (PAAU), Anyigba. Speaking further, he appealed to the Management of CUSTECH, Osara to please allow NLA to use the new and fast growing citadel of higher learning that CUSTECH, Osara is for the body’s annual programme slated for the later part of this year. He added that he and his team members were happy to see the well arranged library, properly stocked with science oriented books that he believes will go a long way to help the students perform well during tests and examinations.

Responding to the NLA team members, Prof. Engr. Salawu Sadiku thanked them heartily for taking their time to visit CUSTECH, Osara, an ivory tower that is just two years old. The Vice Chancellor took the visitors down memory lane narrating to them why CUSTECH, Osara was founded by the Kogi State Government. He said that CUSTECH, Osara is not a conventional university but it is a higher institution of learning that was mainly founded to admit students who are interested in studying science oriented courses. He added that the frustrations many students of Kogi State extraction were experiencing each time they applied to study core science courses in other universities across the country was part of what led the government of Alh. Yahaya Bello, the Executive Governor of Kogi State to come up with CUSTECH, Osara. Also, Engr. Prof. Salawu Sadiku thanked the state government for the attention CUSTECH, Osara is getting from them which has led to the gradual development that is taking place almost on a daily basis.

The University Librarian, Mr. Jeremiah Salifu also expressed his gratitude to Engr. Prof. Salawu Sadiku and the entire Management TEAM of CUSTECH, Osara for joining him to host the professional body he belongs to which is the visiting NLA. He said he is very much comfortable working with other members of the Management Staff and this has given him the much needed zeal and happiness to do his job better.

Engr. Prof. Salawu Sadiku presented souvenirs carrying the logo and the name CUSTECH, Osara to the visiting team of NLA after which a joint photograph was taken in front of the Adminstrative Block of CUSTECH, Osara.